Three-photon (3P) excitation of fluorescent proteins and probes is currently garnering a lot of interest, particularly in neuroscience applications. A big reason is the long penetration depth in the 1300 nm and 1700 nm wavelength windows used for 3P excitation, as demonstrated by Chris Xu and others.

Three-photon excitation can also deliver higher signal-to-noise than two-photon excitation with virtually no out-of-focus fluorescence.  This enables deeper imaging in the live mouse brain, through the complete depth of the > 1 mm thick cortex.

Just as important, the 1300 nm light matches the 3P excitation energy requirements of green fluorescent proteins and probes such as dextran, whereas the 1700 nm light can be used to excite longer wavelength targets like tdTomato.

Some researchers would like to excite multiple probes simultaneously to perform more sophisticated interrogations of the mammalian brain. Such information-rich data can accelerate progress in understanding how neural connections and activity are related to important functions.

Short- and long-wavelength probes can be imaged simultaneously by using both excitation wavelengths. However, this has a few limitations. First, there is the complexity (and cost) of generating beams at both wavelengths and combining them in the microscope. Then there is the issue of power loading; using two laser sources to excite live tissue means using twice the laser power on the sample. Plus, until recently, there was no simple (i.e., “one-box”) source for either 1300 nm or 1700 nm, so researchers would typically use a laser at around 1040 nm to drive a tunable OPA for each of the two wavelengths.

But the combination of two developments have made simultaneous 3P excitation of short and long-wavelength probes much simpler and thus accessible to a broader user audience.

Several recent 3P imaging studies have revealed that 1300 nm can be used to excite both green and red fluorescent probes. The light from the two probes is then separately detected in two cameras using filters. For example, Timo van Kerkoerle and his Ph.D. student Marie Guillemant demonstrated simultaneous excitation of dextran and tdTomato labelled interneurons in mouse prefrontal cortex via 3P excitation using a Monaco and Opera-F tuned to 1300 nm (Figure 1). The z-stack image here shows that red-shifted probe excitation signal is significant even down to a depth of ~1 mm. 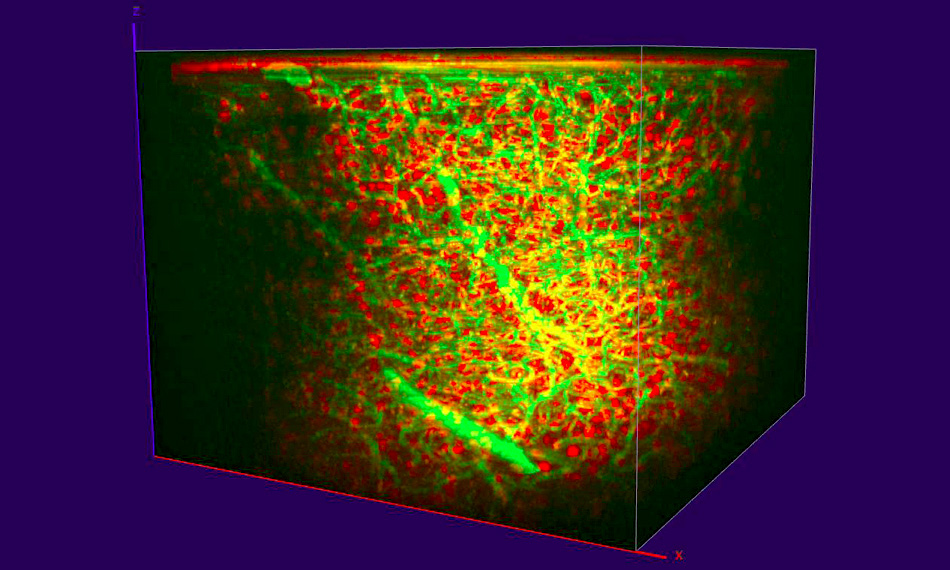 This work showed that many popular red fluorescent molecules which had conventionally been imaged using 1700 nm excitation to the lowest-energy excited state, can also be excited to a higher-energy electronic state by 1300 nm. This novel excitation mechanism allows dual green and red 3P fluorescence imaging in the mouse brain using only 1300 nm laser light.

We believe that these findings from Timo van Kerkoerle and Chris Xu will clearly have an impact on the future direction of 3P excitation of imaging and functional fluorescent probes.

The other useful advance is the recent development of one-box, integrated lasers providing a streamlined source of 1300 nm femtosecond pulses for 3P excitation. An example is the new Coherent Monaco 1300, a simple-to-use, push-button source with a pulse width of less than 50 fs.

This short pulse width is ideal for 3P imaging because it yields high peak power, and 3P image brightness is proportional to the cube of the laser peak power. This new laser also delivers up to 2.5 W of output with a choice of 1, 2, or 4 MHz repetition rates, supporting fast image acquisition. In addition, the laser’s circular high-quality (M2 <1.3) beam maximizes microscope throughput, imaging efficiency, and image resolution in all three axes.

The single-box package also includes the option of two popular features that can simplify 3P imaging and improve the image brightness. These are Total Power Control (TPC) feature that provides on-the-fly power attenuation/gating and a Compact Pulse Compressor (CPC) that provides dispersion precompensation for optimum pulse width at the sample.

A bright future for 3P imaging

The use of a single laser source to excite multiple probes promises to advance the field of neuroscience by enabling fast, information-rich imaging of large brain volumes based on mapping multiple cell types deep across cortical layers. Together these developments in the 3P excitation technology and mechanism should assuredly help guide researchers who are deciding whether they would prefer a tunable versus a single wavelength 3P excitation source and highlights the value of solutions like the Coherent Monaco 1300.

Read more about the Coherent Monaco 1300 in our blog. 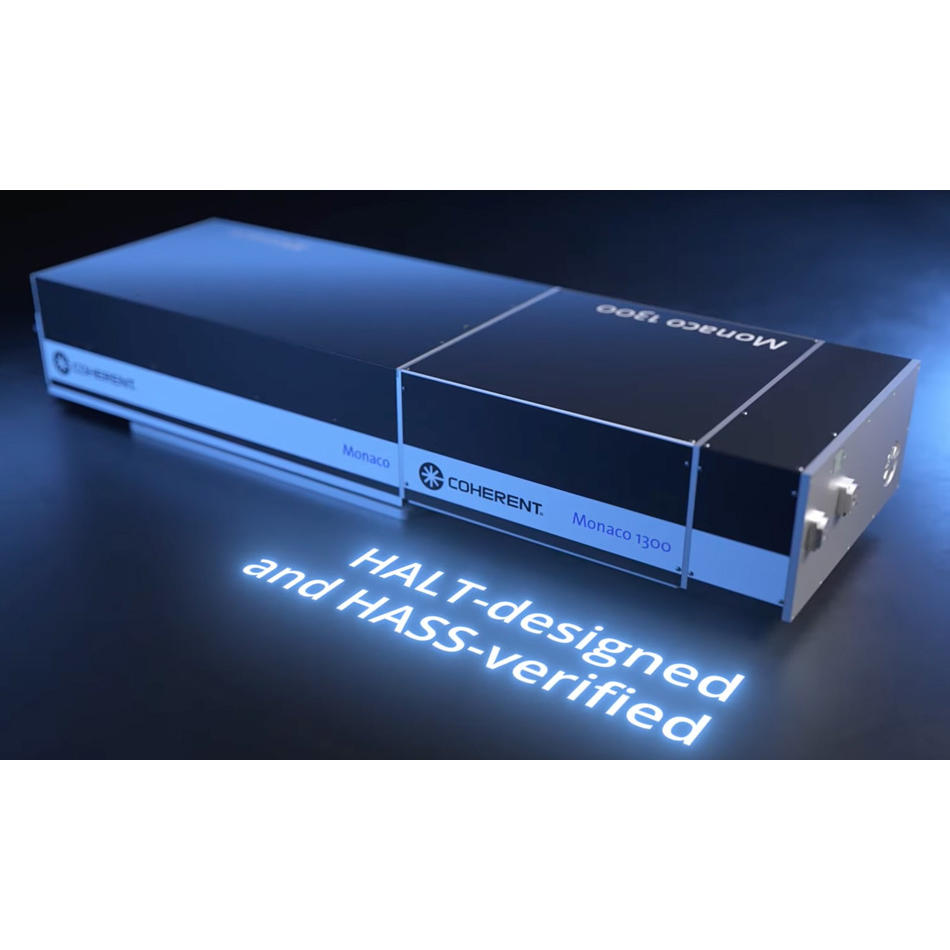 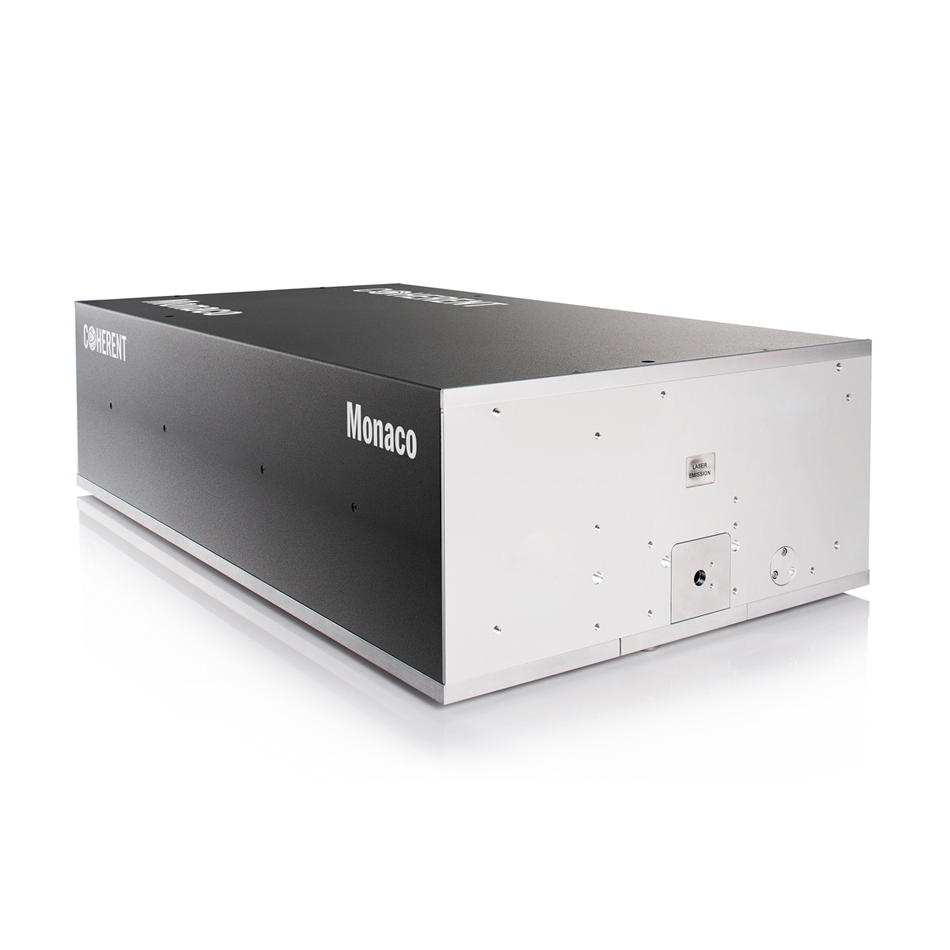