Murine-based neuroscience research represents a major application segment for multiphoton microscopy. This article provides a glimpse into the field by examining a few interesting areas of investigation. As part of the quest toward understanding how cortical neuron networks operate well below the surface of brain tissue, red-shifted functional probes were developed; these are utilized in combination with deeper penetrating, long (i.e., > 1 micron) laser wavelengths. Recently, there is a growing interest in large-scale optogenetic photoactivation and three-photon excitation for ultra-deep images, both of which are photon-hungry. Titanium: Sapphire lasers cannot easily meet these needs, so laser manufacturers turned to ytterbium doped fiber laser engines, which offer several advantages, most notably power scaling and repetition rate agility. 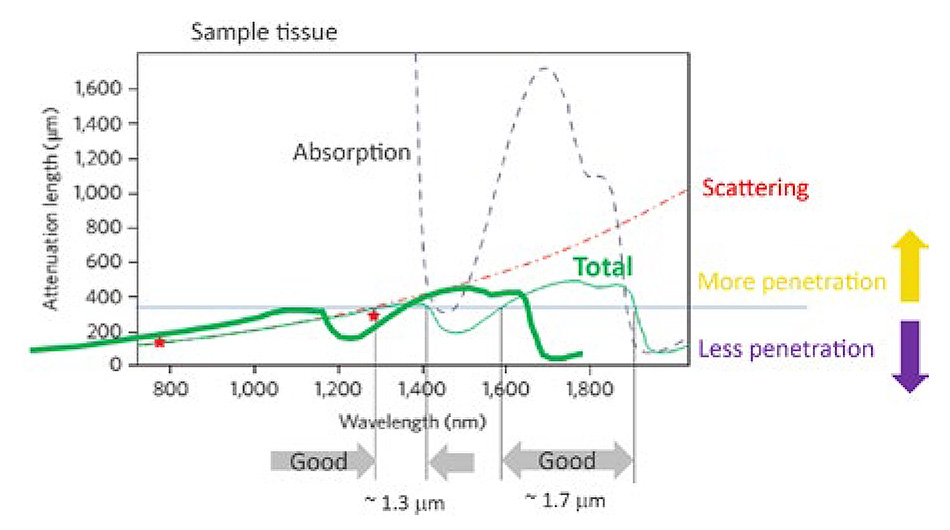 Figure 1: The penetration depth for ultrafast lasers in live brain tissue is limited by a combination of scattering and absorption. There are two optimum penetration windows centered at 1300 and 1700 nm. Based on a private communication with Professor Chris Xu, Cornell University.

Ytterbium fiber lasers provide a fixed wavelength output at around 1040 nm, with tuning across the near infrared achieved with an optical parametric device. At the 80 MHz repetition rates typically used for two photon imaging, an optical parametric oscillator (OPO) is used within the laser head to provide broad wavelength tuning (660 nm to 1320 nm). This enables efficient two-photon excitation of both short wavelength and red-shifted fluorescent probes and proteins. An important additional advantage of this type of one-box source is that the user has access to two different output wavelengths: the fixed Yb output at 1040 nm and the tunable OPO output for optogenetic and other types of “dual wavelengths” experiments. Power is typically 1-3 W in each channel.

Unlike titanium:sapphire, ytterbium fiber is readily power scalable to create amplifiers with very flexible repetition rates (up to 10’s of MHz) that are well-suited for stimulation of larger neuron populations. Applications requiring high power and wavelength tuning, such as three-photon imaging, are then satisfied by adding an optical parametric amplifier (OPA). Several recent advances highlight the convergence of laser technology with the changing needs of the neuroscience community; a few are outlined below

Unlike titanium:sapphire, ytterbium fiber is readily power scalable to create amplifiers with very flexible repetition rates (up to 10’s of MHz) that are well-suited for stimulation of larger neuron populations.

An overarching theme in neuroscience is imaging the full (>1 mm) depth of the mouse cortex, down to the hippocampus. There are two broad infrared “windows” where laser penetration and fluorescence signal retrieval are maximized: at 1.3 and 1.7 µm (fig. 1). Fortunately, the 1.3 µm window is ideal for three-photon excitation probes based on green fluorescent protein, and the 1.7 µm window is ideal for probes based on red fluorescent proteins, like Tdtomato. In addition, these wavelengths also penetrate reasonably well through thin bone, in some cases eliminating the need for a glass cranial window.

Three-photon imaging at these wavelengths is now enabled by ytterbium fiber amplifiers pumping a tunable optical parametric amplifier. With conventional OPAs, the internal architecture is optimized for either short pulses or broad wavelength tuning. But three-photon imaging ideally requires both. So, the latest OPAs designed for this application used a hybrid design, where a non-collinear stage generates the short pulses (compressible to 50-70 fs) followed by a collinear stage which delivers very broad wavelength tuning.

A team led by Jack Waters at the Allen Institute (Seattle, WA) have been using this type of amplifier plus OPA to perform three-photon imaging in this manner to observe how the mouse cortex processes neuromodulatory signals triggered by visual stimuli. The aim of Waters was to survey as much of the cortex as possible. The 1300 nm laser light transmits reasonably well through the mouse cranium so they don’t need a glass window and coold image over a large area of the cortex. Data from their studies are shown in figure 2.

The maximum pulse repetition rate for this type of OPA is currently 2 MHz. But some applications are already needing even higher repetition rates, e.g., to monitor the signaling (via measuring the Ca2+ activity) of all the neurons in a target brain volume, or at least all the neurons in several viewing planes. Imaging larger neuron populations in real time inevitably requires faster scanning together with higher power to compensate for reduced dwell times.

A recent paper by Aliphasha Vaziri and collaborators at several US and Europeans Institutes has successfully demonstrated a novel way of achieving this type of large scale monitoring, while maintaining single neuron resolution [1]. They used 920 nm pulses to perform two-photon excitation of a common calcium indicator, GCAMP6m, with several clever innovations. They used a combination of temporal focusing (TeFo) and conventional focusing to match the focused beam waist to the typical dimensions of a single neuron. In order to monitor a large volume of neurons they elected to use smart scanning that targeted one laser pulse per voxel (i.e., one pulse per neuron). So, they needed high pulse energy. Also, these researchers wanted a pulse repetition rate higher than 4 MHz in order to reach a multihertz (3-160 Hz) viewing speed. Since OPAs have not yet reached this rate, they used an ytterbium fiber amplifier to pump a next-generation tunable ultrafast device called an optical parametric chirped pulse amplifier (OPCPA). This provides output speeds up to several MHz and is tuned by a clever chirp offset. This type of OPCPA is also now available as a single box product with the ytterbium fiber amplifier completely integrated with the compact head. 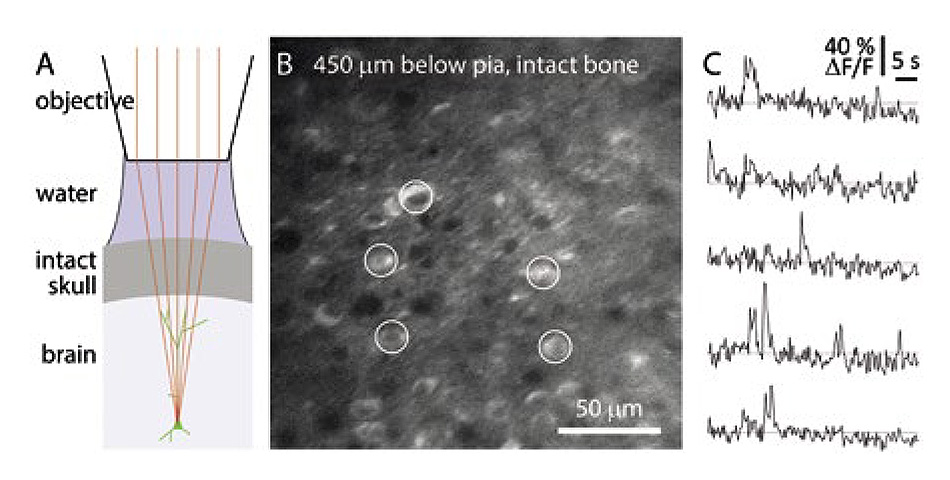 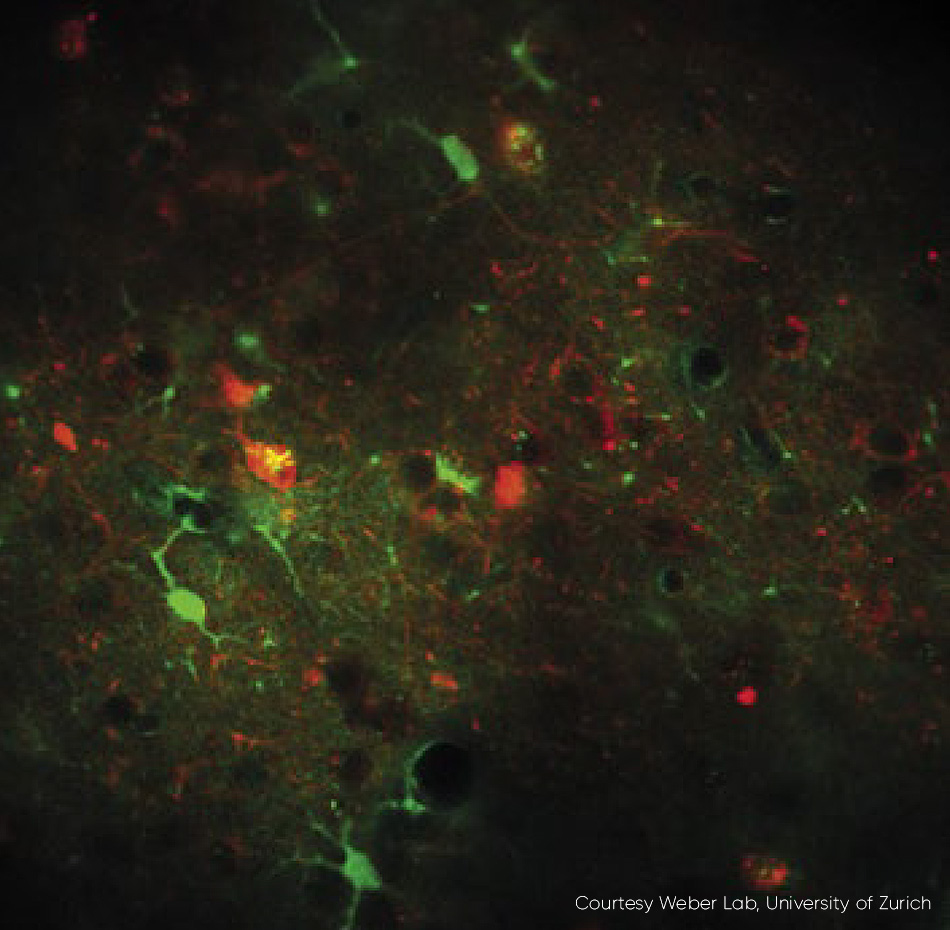 Two-photon absorption of opsin proteins expressed in neurons (i.e., multiphoton optogenetics) is increasingly being used to perform activation and/or silencing of neurons at single neuron resolution. This can be combined with multi-photon calcium imaging to excite and monitor a network of neurons all at single neuron resolution – sometimes called “all optical physiology.” The original pioneer of optogenetics, Karl Deisseroth, is also at the forefront in developing two-photon optogenetic stimulation and silencing. His group at Stanford University are leaders in using two-photon excitation for this purpose.

Here again, the challenges are power and speed. However, the 1035 nm output of an ytterbium amplifier is a perfect match for two-photon excitation of short wavelength opsins, with no need for any type of tunable optical parametric device. And the high speed (0.4-50 MHz) supports even the fastest experiments. According to Jim Marshel from the Deisseroth lab, “10 MHz seems to be an optimum pulse rate that enables efficient photoactivation of tens and maybe hundreds of neurons in chronic, long-term studies. The high power and fast pulsing of the latest ytterbium fiber amplifiers is a good match for this application.”

Advances in neuroscience are not only being supported by new amplifier materials and novel parametric device architectures for cutting edge studies, but existing mainstream two-photon imaging applications are also benefiting from new approaches to practical implementation. An example of this can be found in laser oscillators, where an important part of a complete multiphoton microscope is the technology to control the laser power upstream to the microscope scan head. This is a requirement for optimum performance in even simple raster-scanned experiments - laser power should be completely blocked as the microscope scan head returns the beam spot (fly-back) for the next y scan. It is also an important function for applications scanning large z stacks; as the system focuses deeper into the tissue, natural attenuation dictates the use of higher laser power to maintain constant image intensity. And in increasingly sophisticated high-speed scanning protocols, power control can be used to maintain the optimum power level relative to the voxel dwell time.

High speed power control has proved a challenge for both OEM microscope manufacturers and the large proportion of users who build their own multiphoton microscopes. Specifically, how to adjust the beam power in real time without unduly stretching (chirping) the pulse width or compromising the quality of the round, gaussian beam required for high resolution images.

The latest generation of ytterbium-based lasers now provides full independent control of both the tunable beam and the fixed wavelength beam, before they leave the laser head, i.e., with guaranteed pulse width and TEM00 beam quality (M2 < 1.1). Acousto-optic modulators (AOMs) can be utilized and externally controlled by a 0-10V analog input which is ideal for home-built microscopes, or via direct RF input to the AOMs to minimize cost and complexity for OEM microscope manufacturers. An application that benefits from high speed power modulation is fast frame rate calcium imaging (fig. 3).

Rapid developments in molecular probes and imaging methods, in synergy with complimentary advances in laser technology, are driving multiphoton microscopy to new heights of performance. Neuroscientists are exploiting these advances to increment the state-of-the-art for image resolution, depth, and functional capability, as they continue to unravel the mysteries of the brain.

“10 MHz seems to be an optimum pulse rate that enables efficient photoactivation of tens and maybe hundreds of neurons in chronic, long-term studies. The high power and fast pulsing of the latest ytterbium fiber amplifiers is a good match for this application."