What is Laser Lithotripsy?

Laser lithotripsy is a process that has been around since the 1980s, which entails using lasers to treat kidney stones because they often deliver better patient outcomes than other methods. The Holmium laser is the current “gold standard” for this process, but as technology continues to advance, Thulium fiber lasers are now poised to gain acceptance.

The kidneys filter about 150 liters of blood every single day in the typical adult. Sometimes this filtering produces a mineral buildup. This can be caused by various functional problems, health conditions, or dietary factors. In some cases, this material can crystallize to form “kidney stones.”

Kidney stones can be as small as a grain of sand, or as large as a golf ball. Most are a few millimeters in size or less. Stones that are less than about 4 mm in size usually pass through the urinary tract on their own and are excreted in the urine.

But stones sometimes become lodged somewhere in the urinary tract, especially if they’re larger. If a stone fails to pass on its own (or with the aid of medication) and causes a significant blockage of the urinary tract, it can lead to a serious infection. It’s also extraordinarily painful. In this case, medical treatment is necessary.

Figure 1: A kidney stone of this size (about 5 mm) will usually pass without surgical intervention, although the process may be accompanied by substantial discomfort.

Depending upon the kidney stone size, composition (there are several different types), and location, there are various treatment options.

Ureteroscopy, typically in combination with laser lithotripsy, is the most commonly used method for kidney stone treatment because it offers advantages over other modalities. For example, it is effective on stones regardless of their size, location, or composition. This isn’t true for SWL. Additionally, laser lithotripsy has higher success rates than SWL. It also typically doesn’t leave fragments in the urinary tract which are still large enough to cause a blockage.

The Holmium:YAG (Ho:YAG) laser is the leading tool for lithotripsy. This is a flashlamp-pumped, solid-state laser that produces high-power, pulsed output at a wavelength of 2.1 µm.

The Ho:YAG laser has become popular for several reasons. For example, its wavelength is well-absorbed by water which enables it to efficiently ablate stones. It can also be fiber delivered, which is essential for use with a ureteroscope.

The Ho:YAG is also a flexible tool. Several laser output parameters – repetition rate, pulse energy, and pulse duration – can be adjusted. This allows the surgeon to employ a variety of methods for stone removal. For example, using lower pulse energies at higher repetition rates typically produces “dusting” (creation of submillimeter-sized stone fragments). Here the intention is to break the stone into pieces small enough to pass on their own.

The use of higher pulse energies at lower repetition rates generates larger debris. In this method, called “fragmentation with extraction,” the surgeon then uses the catch basket to remove these larger pieces.

Longer laser pulse durations can be utilized to reduce stone retropulsion; this is the term for the movement of the stone or fragments away from the fiber tip following ablation. Limiting retropulsion is beneficial because it minimizes the need for the surgeon to move the scope in order to locate and capture these escaped stone fragments.

Despite the success and widespread acceptance of the Ho:YAG laser for lithotripsy, it is not a perfect tool. Over the past several years, the thulium fiber laser (TFL) has emerged as an alternative that offers substantial advantages in terms of cost, reliability, performance, and treatment efficacy.

The TFL utilizes the same configuration as most fiber lasers. Namely, pump light from a diode laser is coupled into a gain fiber, in this case a thulium-doped fiber such as the Coherent NuTDF series. The laser cavity is formed by this fiber, which incorporates Fiber Bragg Gratings (FBGs) as the end mirrors.

This construction delivers a number of practical advantages over flashlamp-pumped Ho:YAG technology, including:

The output characteristics of the TFL also deliver significant advantages for lithotripsy. For one, the TFL outputs at 1940 nm. Water absorbs this wavelength about four times more strongly than Ho:YAG wavelength. This enables much more efficient stone ablation. 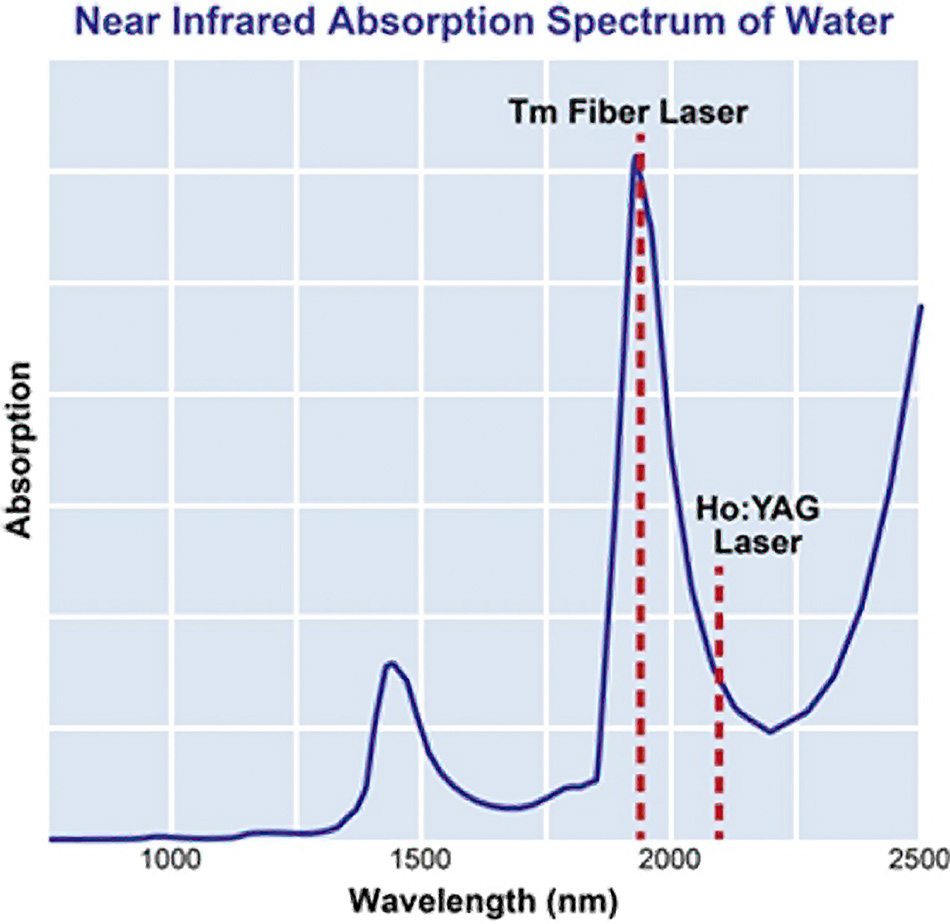 Figure 2: A TFL delivers output at a wavelength that closely matches the absorption peak of water in the near-infrared and can be more efficiently fiber delivered. This makes it a much more ideal surgical source than the Ho:YAG laser.

A second advantage derives from the high-quality output beam of the TFL. The Ho:YAG laser produces a multi-mode, non-uniform beam. This is hard to couple into fiber optics with core diameters of under 200 µm. This lowers the system optical efficiency and also limits the ability to achieve a small focused spot size at the output end of the fiber.

In contrast, the TFL delivers a nearly diffraction-limited, Gaussian distribution output profile, which is free of hot spots. This beam can be readily focused into optical fibers with core diameters as small as 50 µm. This makes it easier to build ureteroscope that produces a small, focused spot, which achieves more efficient treatment.

The TFL also has a much greater operational range in terms of pulse energy, repetition rate (pulse frequency), and even pulse shape. This provides physicians with a much larger “parameter space” to work in and enables more surgical modalities.

For example, the TFL can produce pulse energies that are ten times lower than the Ho:YAG, but also sustain pulse repetition rates that are over ten times larger. This combination allows for more advanced implementation of “dusting” techniques for stone ablation. The ability of the TFL to produce longer pulses than Ho:YAG further limits retropulsion. Additionally, longer pulse duration correlates directly with reduced fiber tip burn back and degradation.

Finally, the ability to deliver the light from a TFL though a smaller diameter fiber could enable a new generation of more effective ureteroscopes. By reducing fiber size, there is more space for irrigation flow which allows the surgeon higher visibility. It can make the instrument smaller, and the fiber more flexible, thus allowing its use in a greater range of surgical scenarios.

While the TFL is a better source for lithotripsy in just about every way, medical users are slow to adopt new technologies. They need clinical studies that verify and quantify the advantages of any new method to convince them to use it. And they need training on how to use new tools.  Plus, there are a variety of regulatory obstacles in qualifying a new medical technology for general use. But, it’s almost inevitable that TFLs will replace Ho:YAG over time as the preferred source for laser lithotripsy.