Holmium:YAG (Ho:YAG) lasers are widely employed for lithotripsy and other surgical modalities with great success. But, these lasers still present some drawbacks in terms of their operational and practical characteristics. These limitations are inherent to the technology and difficult to overcome. Now, thulium (Tm)-doped fiber laser technology has emerged as a possible replacement for Ho:YAG in applications including lithotripsy, prostate enucleation, and other microsurgical procedures. Specifically, Tm-doped fiber lasers promise easier integration for the system builder, lower operating costs and enhanced performance for the user, and improved results for patients.

Ho:YAG lasers are solid-state sources that produce high power, pulsed output at a wavelength of 2.1 µm. This wavelength is more strongly absorbed by water than visible light, enabling efficient tissue ablation. It can also be fiber delivered. As a result, these lasers are used extensively in surgical applications, most prominently in laser lithotripsy, where they are considered the “gold standard” for care.

But, Ho:YAG technology has essentially reached its design limits. Thus, medical laser systems builders who seek higher reliability, improved output characteristics, and, of course, lower cost must look to another technology. The same is true for surgical practitioners who desire tools that will enable them to work more quickly, produce better results, and which cost less to own and operate.

The thulium fiber laser (TFL) was first developed well over a decade ago, and was quickly established as a nearly ideal surgical source, providing several advantages over Ho:YAG technology. This is due a combination of output properties and operational characteristics.

In terms of output, a primary benefit of the TFL is that operates at a wavelength of 1940 nm. This is very much closer to the water absorption peak in the near infrared, meaning light from the TFL is absorbed about four times more strongly than light from the Ho:YAG. Plus, this wavelength is readily fiber delivered. In fact, the high beam quality of a TFL actually enables it to be focused much more efficiently into a fiber than the output of the typical Ho:YAG laser. These characteristics deliver important advantages in surgical applications. 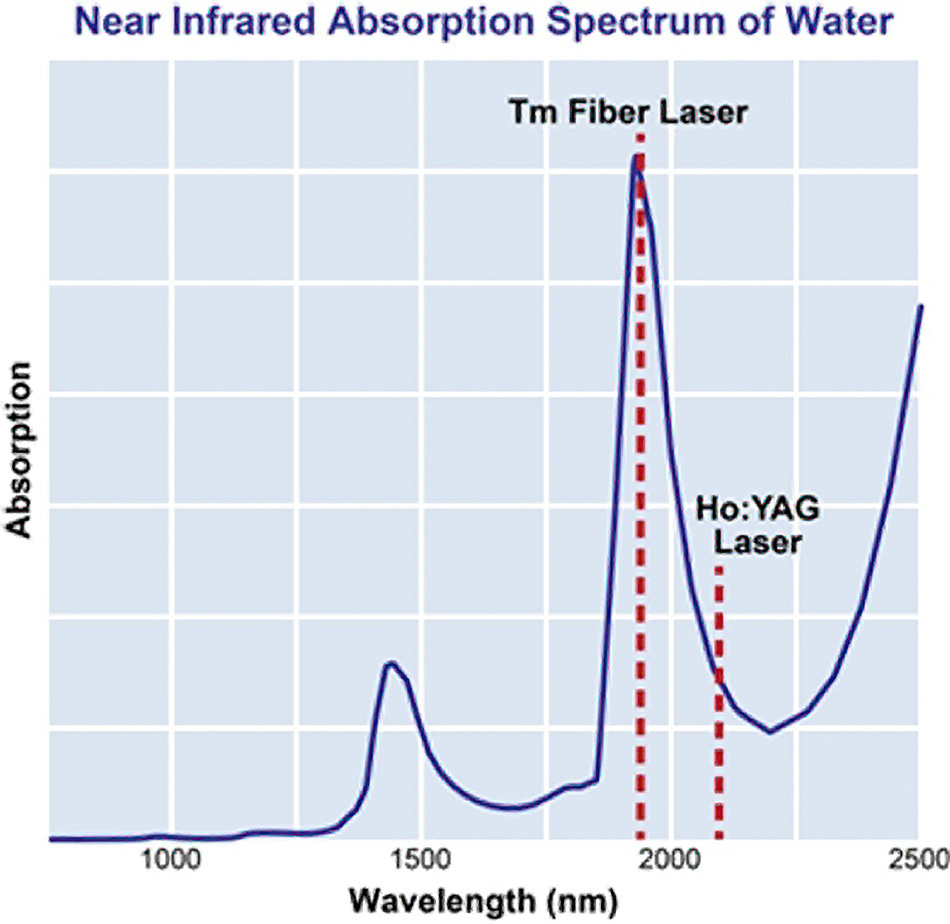 Figure 1: A TFL can be designed to deliver output at a wavelength that closely matches the absorption peak of water in the near infrared, and can be more efficiently fiber delivered. This makes it a much more ideal surgical source than the Ho:YAG laser.

The practical advantages of TFLs derive directly from the way it is built and operates. To understand those, it’s useful to compare the basic construction of Ho:YAG and Tm fiber lasers. 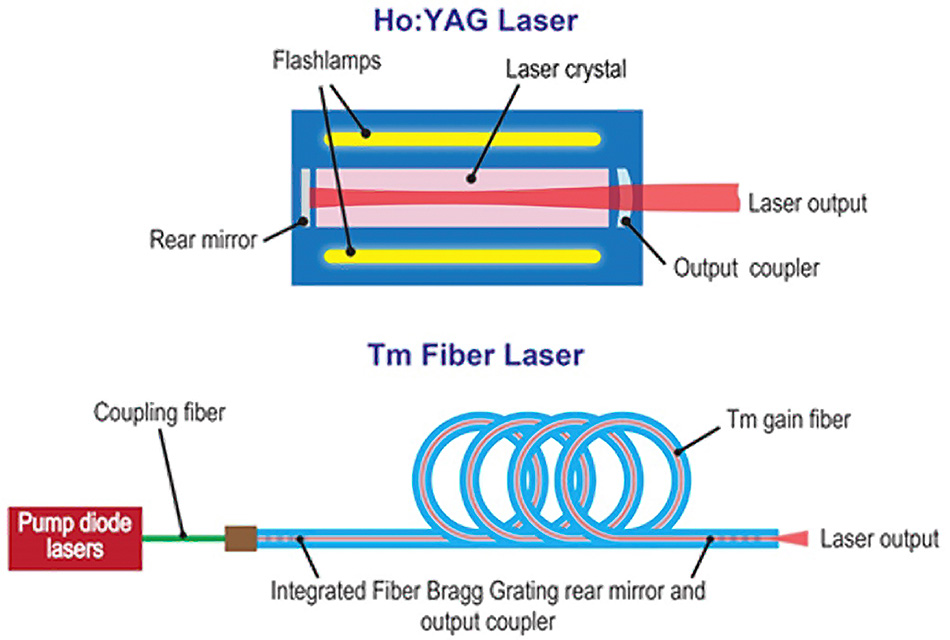 Figure 2: Simplified schematics of the main optical elements of Ho:YAG and Thulium Fiber Lasers. The Ho:YAG utilizes several separate components whose alignment must be maintained precisely for proper operation. The TFL is built using all fiber coupled components, making it largely immune to subsequent misalignment, even when handled roughly.

The Ho:YAG is a flashlamped pumped, solid-state laser. A burst of light from the flashlamp supplies energy to the laser crystal, which then produces a pulse of laser light. The flashlamp, laser crystal, laser resonator mirrors, and other laser cavity components are typically all separate, discrete elements that are rigidly mounted so that they stay in optical alignment.

In a TFL, the laser crystal is replaced by a long optical fiber. This fiber is doped with Tm compounds and other elements so that it provides optical gain (supports laser action). Instead of a flashlamp, pump light is supplied by semiconductor (diode) lasers which are coupled into this fiber. Similarly, the cavity mirrors are also Fiber Bragg Gratings that are integrated directly into the fiber itself. This arrangement produces a number of benefits, including:

Technological improvements over the past several years have resulted in a continual increase in the output power available from commercial TFLs, along with improved reliability and lower cost of ownership. Advanced Thulium-doped optical fibers, such as the Coherent NuTDF series, have been a key element in this progress. These fibers are available in a number of forms to enable construction of a variety of different specific fiber laser configurations.

There are a number of specific advances embodied in the design and fabrication of these fibers. For example, Coherent thulium-doped double clad fibers utilize glass compositions specifically optimized for a high degree of cross-relaxations between Tm ions. This improves the conversion efficiency of light from the pump diodes into laser light. Additionally, the core and cladding geometries have been optimized to deliver single mode output, while still making the fiber dimension large enough to facilitate handling, cleaving, and splicing. This simplifies manufacturing of TFL-based surgical systems and makes them more reliable.

TFLs are particularly advantageous for lithotripsy, and have been extensively investigated for this use. Based on the research and studies conducted to date, the wider range of operational range supported by TFLs seems to produce several tangible benefits for this procedure.

TFLs have capabilities that enhance treatment flexibility, including a larger possible range of pulse repetition rates (as much as ten times higher) and pulse energies that are ten times lower than the Ho:YAG, plus the ability for power shaping of a single pulse. This combination assists in the efficiency of stone ablation as it produces smaller stone fragments and reduces retropulsion (movement of the stone or fragment away from the fiber tip following ablation). Less chasing of stone fragments reduces treatment time and subsequent patient discomfort. Additionally, the TFL supports a wider range of pulse durations than the Ho:YAG, resulting in a reduction of degradation and fiber tip burn back, making TFL fibers reusable.

The superior beam quality of the TFL, which allows the use of much smaller diameter beam delivery fibers, also has a significant impact on both treatment and fiber lifetime. In terms of treatment, a smaller fiber diameter seems to produce smaller stone fragments and reduces retropulsion. Furthermore, the lack of hot spots in the TFL beam further limits tip burn back, making TFL fibers reusable.

Small fibers are also a key enabling technology in a new generation of more effective ureteroscopes. By reducing fiber size, there is more space for irrigation flow which allows the surgeon higher visibility. It can make the instrument smaller, and the fiber more flexible, thus allowing its use in a greater range of surgical scenarios.

Overall, research has established much higher ablation rates and reduced operative time (as much as a factor of four) for the TFL as compared to the Ho:YAG laser. This is due to a combination of stones’ stronger absorption of the light from the TFL, the laser’s pulsing characteristics, and the reduction of retropulsion, which requires the surgeon to frequently readjust the ureteroscope.

Several techniques are currently in use for treating benign prostatic hyperplasia (BPH). Transurethral resection of the prostate (TURP), which uses a non-laser method (a hot wire) for tissue removal, is currently considered the gold standard for care. Surgery utilizing the Ho:YAG laser, and also Tm:YAG lasers (solid state lasers, not fiber lasers), are also in widespread use.

While the exact optimal working methods for TFL enucleation of the prostate (ThuFLEP) are still very much under investigation and in development, some definite conclusions about the process can be drawn from the work already performed. First, TFL seems to go faster (less operative time) than other laser methods, but not as quickly as TURP.

A typical ThuFLEP system has separate settings for enucleation (prostate tissue removal) and hemostasis (stopping bleeding). This allows the surgeon to efficiently remove prostate tissue, but then switch settings to stop bleeding if it occurs. One area where ThuFLEP seems to have a clear advantage is in hemostasis. This is due to the combination of low peak power, long pulse width, and the shallow depth of penetration (due to high water absorption) that are unique to the TFL. This all has the effect of rapidly cauterizing a large area of tissue.

The TFL also delivers excellent tissue separation during enucleation, although it’s not clear that it’s superior in this regard to other sources. However, clinical tests indicate that ThuFLEP can improve surgical outcomes, particularly in preserving postoperative erectile function, which has particularly been an issue for TURP.

The high reliability, exceptional ruggedness, low cost-of-ownership, and excellent output quality typical of fiber lasers that output at a wavelength of 1 µm has led to their widespread in industrial materials processing applications. Now, fiber lasers based on Tm-doped active optical fibers are delivering the same benefits for a new generation of lasers that operate at 1.94 µm. These fibers show tremendous promise as a surgical laser source that delivers improved safety and better patient outcomes over previous technologies, and are more cost-effective and easier to integrate for the system builder.