Laser beams with a uniform intensity profile, sometimes called a “flat-top” or “top-hat” distribution, generally offer higher efficiency and better surgical outcomes than the traditional Gaussian intensity profile. But, most lasers inherently produce a Gaussian intensity output, and converting this into a flat-top distribution usually isn’t practical in medical laser systems for both cost and performance reasons. To address this need, Coherent has developed a new generation of beam delivery fibers that are internally structured to convert an input Gaussian beam into flat-top. These provide a simple way to obtain flat-top output in fiber beam delivery systems without substantially increasing system cost or complexity.

Lasers are widely utilized for a variety of surgical and therapeutic applications in medicine and dentistry for a number of reasons. These include the ability to perform highly selective tissue removal or treatment, the capability in some cases for cutting, ablating and coagulating tissue with the same source, and their compatibility with endoscopic delivery. The benefits of laser treatment include better surgical outcomes, less post-operative pain and edema, as well as faster recovery.

These benefits accrue because of the specific characteristic of lasers. For example, lasers can be focused to very small spot sizes, which enables their spatial selectivity. This leads to reduced damage to surrounding tissue. Furthermore, the laser wavelength can be selected to produce a specific output on a particular tissue (sometimes when combined with photosensitizing agent), again avoiding damage to surrounding tissues or structures. Also lasers don’t produce vibration or pressure during use, further minimizing the trauma of surgery.

Most laser procedures operate in a photothermal mode. That is, the laser light is absorbed by the tissue or photosensitizer causing heating, which results in tissue destruction or removal. To actually accomplish this, the laser is typically focused to a relatively small spot. This concentrates the laser light and increases its intensity so that it exceeds the threshold required to produce the desired outcome (e.g. ablation, coagulation, or both). It also limits the area over which this heating occurs which enables the laser’s spatial selectivity.

Most of the solid state lasers used for surgery (including Er:YAG, Nd:YAG, Ho:YAG) produce a beam with a Gaussian intensity distribution. The fiber optics used to deliver these beams in an endoscope largely maintain this intensity profile.

Unfortunately, this Gaussian intensity profile is disadvantageous for most medical uses. Most importantly, this intensity distribution wastes energy, as is shown in the drawing which plots the intensity of the beam as a function of position. 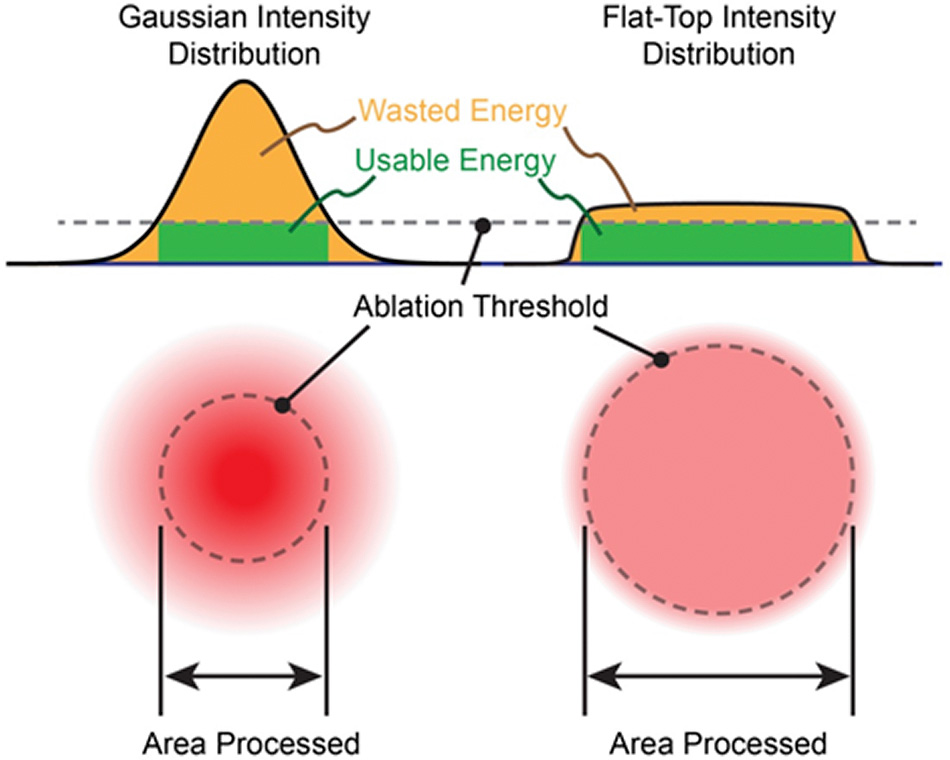 Figure 1: A flat-top intensity profile utilizes laser energy more efficiently – that is, to perform the desired surgical process. A Gaussian beam has large areas in which the intensity is either too low, which heats tissue without transforming it, or too high, which wastes energy.

Because of the relatively gentle slope of the Gaussian distribution, a large part of the beam outside of the center region isn’t intense enough to reach the ablation threshold of the tissue. That means that this energy heats the tissue, but doesn’t remove it, or produce whatever other effect is desired. The excess heat, radiation, or other factors applied in the surgical field may result in unintended damage to surrounding healthy tissue. Plus, the affected areas won’t have a sharp or well defined edge due to the way the Gaussian beam gently fades away. This reduces the spatial selectivity of the process.

Conversely, in much of the central portion of the beam the light intensity is substantially higher than the ablation threshold. This means it delivers more energy than required to produce the required effect. Much of the laser power is therefore wasted.

A flat-top beam profile can avoid all these problems if the laser power is set so that the maximum intensity is just above the ablation threshold. Then the bulk of the laser energy goes into performing the desired process, and very little is wasted or goes into simply heating the tissue. Plus, the region in which the beam intensity is below the ablation threshold is quite small. This increases the accuracy of the process and makes the edges of the laser treated area more sharply defined.

Flat-top laser beams are desirable in many applications outside of medicine, so a number of different ways to convert Gaussian beams into that format have been developed over the years. These typically are optical components, or component assemblies, used outside the laser itself to transform its output intensity distribution.

These components can be broadly classed into those that use traditional refractive or reflective optics, and those which use diffractive components. Refractive methods can involve traditional spherical lenses, aspheres, or even freeform optics. Ultimately, all of these methods selectively redirect some of the light from the center of the beam out into the edges in order to flatten the intensity profile.

Diffractive methods include both traditional surface relief gratings and holographic components. These might be in the form of lenslet arrays which break the input beam up into many different individual beams which then combine to produce a flat-top profile in the far field. Similarly, holographic gratings can diffract the input beam into several overlapping beamlets which yield a flat-top profile in the focal plane.

None of the methods that rely on discrete optical components really deliver the combination of optical, mechanical, and cost characteristics required for medical applications. Since many surgical and therapeutic laser procedures already involve fiber delivery, using the fiber itself to transform the intensity distribution offers an ideal solution. It doesn’t make the system any larger or more complex, and has a relatively low impact on total system cost.

Specialty fiber optics for beam and intensity profile shaping have also been available for some time. These utilize a variety of different techniques including shaped cores, long period gratings, and multi-mode interference methods. All these methods offer the benefits associated with fiber technology, including low insertion low, small size, and high reliability. But, for various reasons, they are also either impractical to implement or fail to deliver the necessary performance. So, the need for a high performance, scalable, all-fiber method to transform beam profile remained.

Coherent has developed new fiber technology specifically to fill this need. It relies on the fact that most optical fibers can at least potentially support hundreds or thousands of different transverse modes (as shown in Figure 2). Most commonly, fibers and fiber coupling optics are specifically designed to minimize coupling into those higher order modes, because doing that increases the focused spot size and takes intensity away from the center of the beam.

Figure 2: A gallery of the intensity profiles of some of the transverse modes of a typical multimode, step-index, circular core optical fiber.

However, in this case, it is useful to couple into the higher order modes. But, it must be done in a completely deterministic and reliable way so as to produce a flat-top intensity distribution with the required size and divergence angle.

The key to accomplishing this is to select a number of specific modes that when superimposed in the proper ratios will provide precisely the required output distribution. Coherent has now created fibers that reliably and repeatably do this by incorporating “mode mixing” elements into the fiber core. These mode mixing elements use a combination of refractive index and alignment variations. They distribute the required amount of light into the chosen higher order modes.

The figure shows a sample transverse mode distribution and the resultant flat-top output intensity profile for the Coherent flat-top fiber, called NuBEAM Flat-Top. Specifically, it plots the relative energy distribution of the first 400 transverse modes when a single mode laser beam is launched into the flat-top fiber. The mode composition of a standard multi-mode fiber under the same operating conditions is shown for comparison. 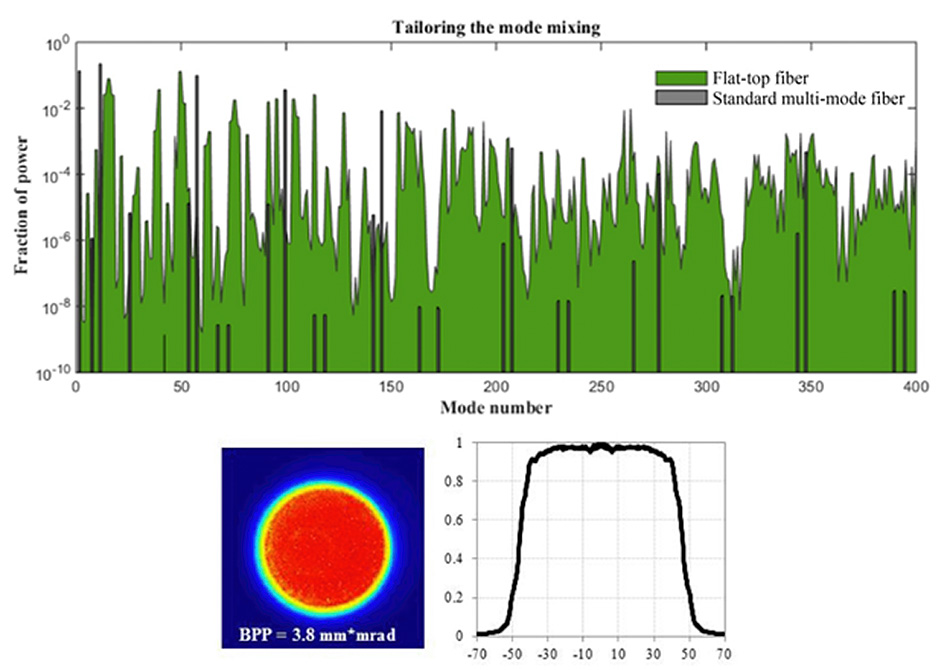 The resultant flat-top output is quite uniform, and the attenuation is not significantly different than that of standard step index fibers with pure silica cores. Just as important, this particular flat-top fiber was designed with identical specifications to a standard beam delivery fiber (see table). Thus, the NuBEAM Flat-Top provides the desired output characteristics while maintaining all the other physical and optical attributes of standard fibers. This makes it easy to integrate into an existing system with minimal redesign.

Table 1: The NuBEAM flat-top fiber has the same characteristics as other common beam delivery fibers, making it easy to use without significant system redesign.

The other important aspect of the NuBEAM Flat-Top technology is that it is readily scalable. Specifically, the beam parameter product (BPP) for this type of fiber can be changed while still maintaining a well homogenized flat-top beam profile. This is accomplished by tuning the design of the mode mixing elements to change the exact combination of modes supported, and the amount of energy coupled into each. Thus, fiber output can be matched specifically to the needs of the application.

Flat-top beam profiles offer better outcomes in a variety of surgical and therapeutic applications. But, the cost and practical difficulties of converting the Gaussian intensity profile output from most lasers into this format have prevented widespread use of flat-top beams in medical systems. The NuBEAM Flat-Top technology provides an easy way to obtain the flat-top beam profile from a delivery fiber which is in other all respects substantially the same as those already in use. This makes the technology easy to adopt, without risk or technical difficulty, and without impact time-to-market.