What is Laser Ablation?

Laser ablation is the process of removing material from a solid substance. Many different laser types are used, and the technique can be applied to virtually any class of material – metals, semiconductors, glass, ceramics, polymers, wood, stone, tissue and other biological materials.

Lasers are used for selective material removal in an extremely broad range of applications – from the production of advanced integrated circuit packaging to corneal reshaping to making plastic signs. But in all these diverse applications, lasers tend to deliver similar benefits that distinguish them from other technologies. These include:

While laser ablation delivers similar advantages in many applications,  the technique works via a range of methods. These depend upon the laser type, the material itself, and the job requirements. Broadly speaking, though, all ablation processes operate through photothermal or photoablative interactions. It’s not uncommon for a combination of the two to occur within a single process.

In a photothermal process, material is removed by intense, spatially confined heating. Essentially the substance is rapidly heated until material is either boiled off or sublimated (directly transformed from solid to gas or plasma, without going through an intervening liquid phase).

Photothermal processing typically puts a fair amount of heat into the work piece. So, it’s not usually used with heat sensitive parts(with materials that have high thermal conductivity), or on smaller work pieces (where the heat can readily reach other areas of the part). Photothermal processing typically offers relatively rapid material removal rates making it useful in high throughput production applications and those that cover large areas.

The second method – photoablation – involves directly breaking the molecular or atomic bonds which hold a material together, rather than heating it. This makes it a “cold” process. There are generally two ways to achieve this bond breaking.

Photoablation is used for the highest precision applications and those which require the smallest HAZ (often just 10s of microns). However, the material removal rates are generally much lower than for photothermal ablation. And the USP sources are typically larger and more costly than the lasers used for photothermal processes. 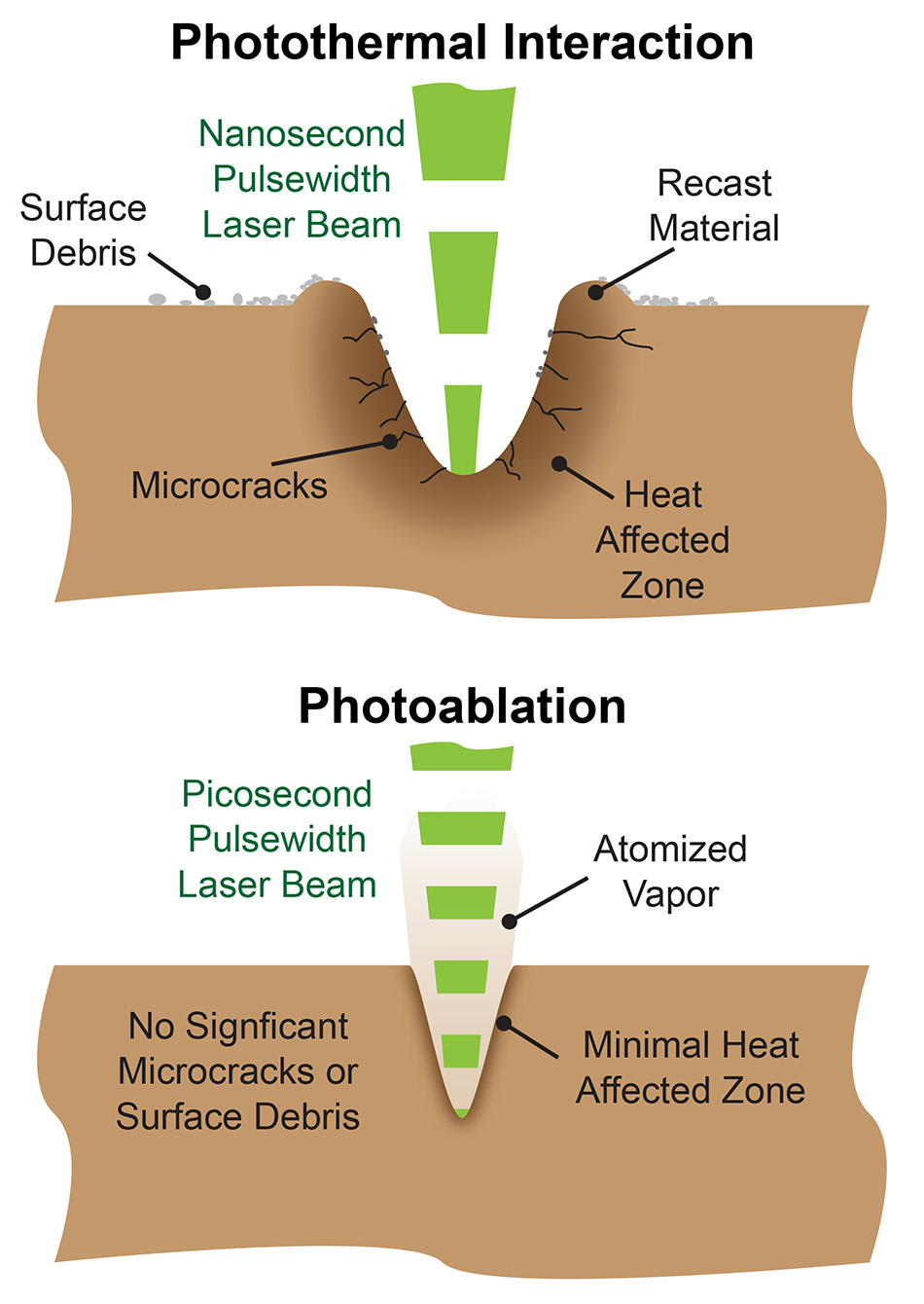 Many lasers for myriad applications

Virtually all laser cutting and drilling processes can be considered ablation. But it’s useful to limit this discussion just to applications involving selective material removal or surface structuring, and not through-cutting. One way to categorize the wide range of ablation applications is by material.

Metals: Metal ablation is utilized in many different industrial applications. Some of these involve removing a foreign material from the surface of a metal part. For example, ablating off rust, corrosion, paint, or other coatings. This could also include cleaning oil, adhesives, or other unwanted contaminants from a part surface prior to painting, coating, bonding or other processes.

Ideally, a laser source for this type of ablation will be absorbed by the foreign substance but not the underlying metal. This makes it relatively easy to clean the surface without any risk of damaging the part. Depending upon the exact materials involved, this usually means using a fiber, CO2, or nanosecond pulsewidth diode-pumped, solid-state (DPSS) laser.

For laser etching and engraving of metals, which can be performed for industrial marking or even decorative purposes, the intent is to remove material from the part itself. This is typically done with a fiber laser, or a nanosecond DPSS laser, usually with output in the green or UV. The latter are particularly employed with thinner, delicate, or heat sensitive parts. For the most heat sensitive metal ablation applications, a USP laser is sometimes used.

Semiconductors: The primary application for laser ablation of semiconductor materials is etching or engraving marks on wafers in the course of microelectronic circuit fabrication. This is mostly accomplished with nanosecond DPSS lasers with output in the green or UV, since most semiconductors are at least somewhat transparent at the infrared fundamental wavelength of these sources.

Glass: Glass is utilized in an extraordinarily wide range of applications, and the use lasers for glass ablation is similarly diverse. Decorative etching applications – such as personalizing or producing patterns on drinking glasses, wine goblets, mugs, bottles, and more – are almost universally performed with a CO2 laser. Higher precision glass etching tasks, including marking products and containers used in the semiconductor, display, and pharmaceutical industries, typically uses either CO2 or UV DPSS lasers.

Another important laser glass ablation application is the production of “microfluidic” devices. These are glass substrates containing small channels (sub-millimeter cross section) through which fluid flow can be precisely controlled. Microfluidics forms the basis of so-called “lab on a chip” devices for techniques including PCR amplification and DNA analysis. UV DPSS and USP lasers can be used to ablate these channels with high precision.

Polymers: Polymers are also laser ablated in numerous different industries. For example, high precision laser ablation is used for texturing the surfaces of medical implants, and for selectively removing polymer coatings from medical devices. In microelectronics packaging, laser ablation is used for “trenching” around system in package (SiP) devices which have been encapsulated in a polymer resin. This is done prior to singulation (separation into individual devices). The wide variety of polymers involved in these applications, together the varying requirements for process speed and other factors, means that nearly every type of laser is employed for precision polymer ablation.

Polymer etching and engraving – acrylics in particular – is also widely used in the production of indoor and outdoor signs. Again, this is almost entirely done with CO2 laser-based systems. These can also etch and engrave organic materials, including wood and leather, as well as stone.

Tissue: Quite a few surgical and therapeutic medical procedures rely on laser ablation. This includes LASIK and PRK, which both utilize an excimer laser to ablate and reshape the cornea. Well over a million of these two procedures are performed worldwide each year.

Lasers are used to ablate both soft and hard tissue in many other surgical and dental applications. These include tumor removal, treatment of benign prostatic hyperplasia (BPH), lithotripsy (kidney stone ablation), maxillofacial surgery, and various forms of neurosurgery.

A variety of DPSS laser types, including Er:YAG, Nd;YAG, Ho;YAG, and thulium fiber lasers (TFLs) are used for most of the surgical applications. All of these lasers produce high power midinfrared output (which is near a water absorption peak), and their light can also be fiber delivered. This allows efficient and highly selective tissue removal using a minimally invasive surgical instrument.

CO2 lasers, which aren’t readily fiber delivered, are widely employed in applications in oral surgery and otorhinolaryngology. The great advantage of the CO2 laser is its ability to both ablate and coagulate tissue. This reduces blood loss during a procedure and facilitates speedy patient recovery.

Coherent supports laser ablation applications from development through production. Coherent Labs has extensive experience in the ablation of many different materials and has virtually every laser type available on which to test and develop process recipes.